The Z250 is the new kid on the block in the Kawasaki range and wears the crown of being the most affordable of the green bikes on sale in India. We took it out for a comprehensive road test (you'll see the story in the upcoming January 2015 issue) and here's what we learnt about the Z250. 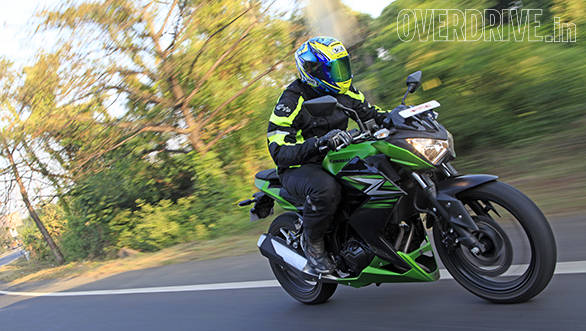 Pretty isn't it? The Z250 borrows the scowl from the Z800 and combines it with a skimpy little fairing that makes it look rather good

The Z250 is sort of a naked motorcycle based on the old Ninja 250. I say old because Kawasaki's entry-sportsbike, a perennial seller around the world, is now the Ninja 300. I say sort of because on the one hand, the ergonomics suggest that sporty riding position of a sport-naked motorcycle. However, fully naked the bike isn't - there's a skimpy Z-shaped fairing that looks rather nice while revealing a huge amount of the powertrain. 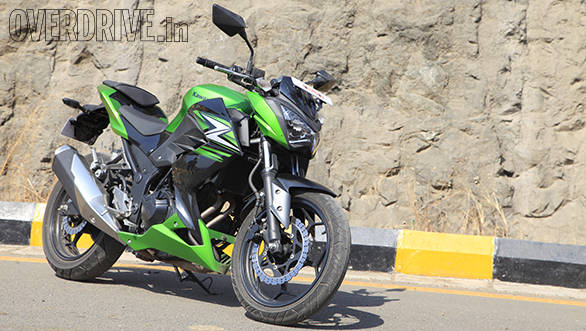 The Z250 borrows a bunch of Ninja 300 parts including the exhaust, tail section, instruments and more 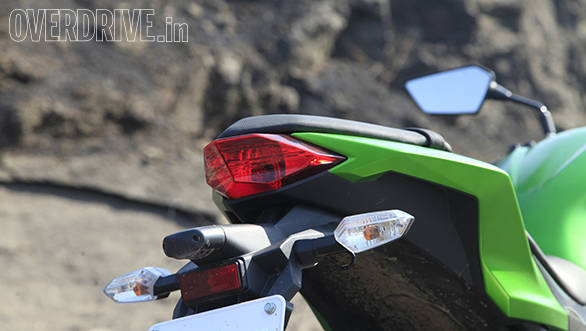 Does that tail lamp look familar? Yes, that's exactly the same as the Ninja 300

Very likeable and partly perturbing. The engine, as you know, is a liquid-cooled, fuel injected 32PS 250cc twin with a six-speed gearbox. This engine that has been around for a while is known to be a reliable little number. The surprise is that despite the 12,500rpm redline, it's a sweet little bike at low revs. During our economy testing, I handled speedbreakers in third gear without stumbling and was generally surprised at how genial the twin is at low revs. 20kmph in sixth gear? Yes, why not? But to make progress, you need to pass 3,500rpm, after which the torque begins to arrive. Real punch though lies north of 9,000 and there's a hefty dollop of power between 11,000 and redline that feels and sounds tremendous. 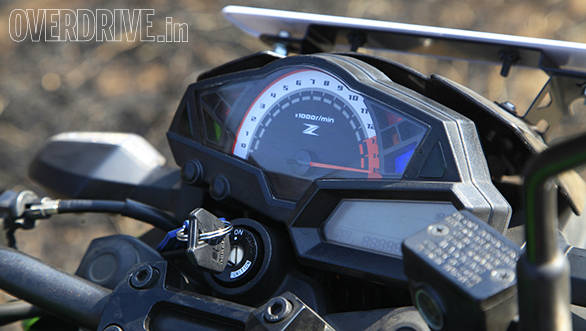 Notice the needle buried in the red? That's just the self-check but if you want all the performance from the engine, then that's how you have to ride the Z250

The fairly slick, low-effort and positive gearbox is perhaps critical. Because while it is possible to ride the Z250 pretty swiftly through traffic in as high as fourth or fifth gear, when you want to kick it up a notch, you literally have to kick it up a notch. As in, lots of gear changes and lots of revs are needed for full-hard acceleration. The engine loves this kind of thrashing but it's hard work. Between a slightly hard throttle spring and the time it takes to loft the revs to the five digit zone on the tacho, riding this hard takes a lot of effort. That's not a bad thing on its own, but it won't be everyone's cup of tea either.

And in the corners?

It's a small, compact motorcycle that feels great. The Ninja 250's more committed riding position perhaps allows you to feel marginally more, but the Z250 is easy to trust and corner hard. As usual, the IRC Road Winners are a couple of steps behind what the chassis is capable of but on the whole, the Z250 is rather enjoyable. Ride quality is on the stiff side of supple but it can absorb a fair amount of road quite nicely. The brakes are friendly and strong if you need them but ABS is omitted from the Z250 for India. 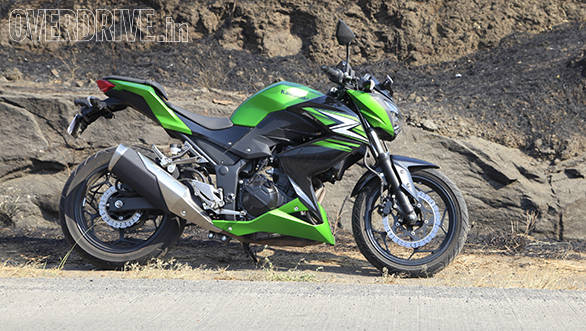 The Z250 makes a very likeable package overall but taken as a whole, it is expensive

As likeable as the Z250 is, I found it hard to classify it as a sportsbike with a skimpy fairing or indeed, as a small, fast streetbike. It sort of straddles the two. This straddling combined with the wide range of useable torque but a narrow band of really thrillingly flowing torque, similarly, makes the Z250 a bit confusing to ride. I was happy as long as the revs were around 7,000rpm, but that's not a small amount of revs. 7,000rpm in top gear is a 100kmph (and 120kmph is 9,000!) so despite the 32PS, this bike will need lots of revs on long rides too. On the flip side, economy stayed above 30kmpl in all of our testing. So you'll like it when you test ride it...

Actually lots of them. First is the price. At Rs 3.31 lakh on-road Pune, the Z250 is an expensive motorcycle. And it doesn't even get ABS for the price.

Second is also the price. It puts it Rs 60,000 below the Ninja 300 and I would say skimp, save, wait and/or take a loan and get the Ninja 300 instead. It's a newer motorcycle, has more power and feels better on the highway. In any case, the Z250 already wears the N300's tail section, instruments, exhaust and alloy wheels. Third is the fact that Kawasaki already showed the Z300 based on the Ninja 300 and therefore is the next step in the Z250 line. I don't see why you should settle for anything less.

The Prize winners and Finale | Mercedes-Benz | Frame The Star Challenge..

Sustaining Ladakh's Hidden Heritage on a Hyundai i20..

Warning: file_get_contents(): http:// wrapper is disabled in the server configuration by allow_url_fopen=0 in /home/overdrive.in/article.php on line 391

Warning: file_get_contents(http://t.in.com/createshorturl.php?url=http://suzukimotorways.com//reviews/kawasaki-z250-india-first-ride-review/&format=text): failed to open stream: no suitable wrapper could be found in /home/overdrive.in/article.php on line 391